The Unstoppable Thoughts of God 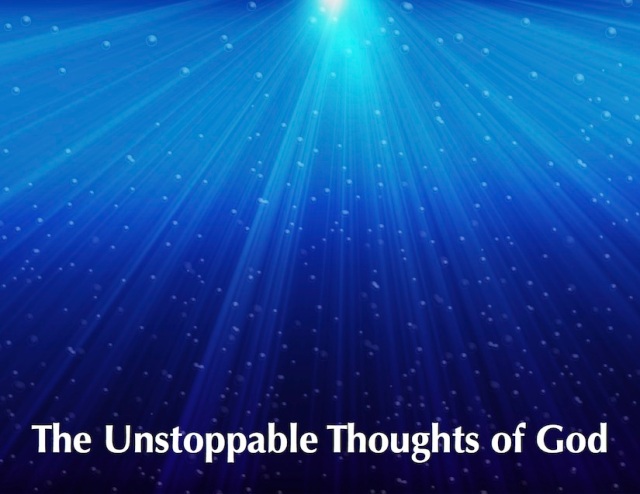 If God thinks something, it will happen. Once He decides, there is no reversal. We can pray to Him before He makes that decision and He will consider what we say, even changing what He was going to do. However, once God has made a promise, that is it. This is known as the immutability of God, He is unchanging.

Someone said, “Consistency, thou art a jewel!” It is a jewel, because it is not often seen. It is rare in people. With God, we always see it and it never stops, “Every good gift and every perfect gift is from above, and comes down from the Father of lights, with whom there is no variation or shadow of turning” (Jam 1.17).

Man-made and natural light sources vary, because the source of the light blocks light, or it is just inconsistent. Even the sun is not consistent. God is consistent in His essence, His will, and His actions. Nothing changes Him. As He was yesterday, so He will continue to be tomorrow.

Isaiah 14.24–27 The Unstoppable Thoughts of God in Action

Isaiah wrote, “The LORD of hosts has sworn, saying, ‘Surely, as I have thought, so it shall come to pass, And as I have purposed, so it shall stand: That I will break the Assyrian in My land…This is the purpose that is purposed against the whole earth…For the LORD of hosts has purposed, And who will annul it? His hand is stretched out, And who will turn it back?’” (Isa 14.24–27).

Remember what this passage said, for it speaks volumes to Christians, and there is something to which we can cling. Built into this text is a promise for all nations, which includes all nations today, to look at what God did to Assyria and know that He will do the same to any nation. You see, God does not change.

God wants us to know the power of His thoughts, “Remember this, and show yourselves men…I am God, and there is no other…Declaring the end from the beginning, And from ancient times things that are not yet done, Saying, ‘My counsel shall stand, And I will do all My pleasure,’ Calling a bird of prey from the east…Indeed I have spoken it; I will also bring it to pass. I have purposed it; I will also do it” (Isa 46.8–11).

God spoke to Israel, warning them that He would call a nation from the East and use that nation to punish God’s people. He wanted them to remember the former things of old that there was no other God like Him, although Israel and Judah worshiped other gods. None of those other gods could do what Yahweh God of Israel could do, declaring the end from the beginning (v. 10), even declaring things from the distant past about future things not yet done, proclaiming that His counsel would stand and He would do all His pleasure.

He wants the church to remember this passage, because He included it in the Bible and we can know His promises of the future will happen based on our observations of what He did in the past, which is why we need to know the Old Testament.

Did it happen? It happened precisely as He prophesied. Babylon, like a bird of prey, swooped down on the holy land, and you know the rest of the story.

What does all this mean for non-Christians? They do not experience these blessings now and they will not in eternity. However, what this all means for the non-Christian is this also. Your eternal destiny is not sealed yet. If you turn away from a sinful life and life for Jesus, God promises that He will forgive your sins. Then you have all the good things I have shown you for Christians.

Do you believe with all your heart that Jesus is the Son of God? Are you willing to verbalize that? Are you wanting to change your life? Have you been baptized to have your sins forgiven?

7 thoughts on “The Unstoppable Thoughts of God”