The Ultimate Song, Song of Solomon 1.1 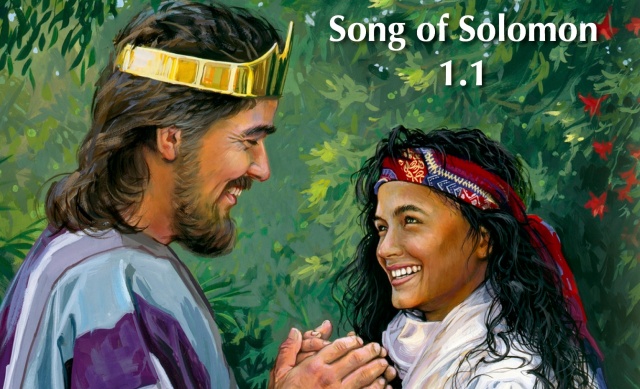 Solomon and the Shulamite GoodSalt-pppas0591

What love song of the world surpasses this one?

Song of Solomon 1.1 – The Ultimate Song

What is a song? Often, it is poetry set to music. Why does a song appeal to us? Its arrangement makes it easy to repeat, hence to memorize. Music appeals to the heart.

Why is this the Song of songs? Many songs speak of love between a man and a woman, but this is a song the Holy Spirit incorporated into the Scriptures, which immediately elevates it above any other writing, for He who created man and woman for one another in marriage, wanted us to have this Song, showing that it reveals the heart of God for us.

What makes this the Song of songs? It is a collection of divinely-inspired love poems. It does not picture love the way the world does. It beautifies marital love as God designed it. It is also written by King Solomon, who had wisdom from God, who was inspired by God and who was highly trained in literary expression. It is the Song of songs in the Book of books from the Lord of lords!

However, the first and obvious application of the Song of Solomon is the married love between a man and a woman. What logical or scriptural objection could there be to this view?

The Nature of the Song

The Song shows the emotions of love in pictures, including the feelings of falling in love, impatience for the marriage, the desire to be with one another, the despair of separation, and the satisfaction of the fulfillment of biblical love.

We want to see how Solomon and the Shulamite feel toward one another, and then learn from them how we should feel.

Leland Ryken points out that the setting of the poetry is mostly pastoral. We see sheep and shepherds, and their work, giving it a rustic atmosphere. Therefore, invitations to a life of love resemble time in the countryside (2.10–14; 7.10–13).

“Another pastoral form is the blazon, in which the speaker praises the beauty and virtue of the beloved by comparing them to objects in nature” (Leland Ryken, Words of Delight: A Literary Introduction to the Bible, Grand Rapids, Michigan. Baker Book House, 1987, p. 275).

And this form appears frequently in the Song of Solomon. Metaphors from nature fill this love song (1.14; 2.3). Why use pastoral imagery to write about love? It leaves room for general application rather than for one couple. All cultures can use the imagery and the meaning stays as strong. The delights of nature are easily adapted to writing of romantic love.

The Poetry of the Song of Solomon

Why do we use poetry? It prevents rapid reading, causing us to pause and to think on the images rather than just the words. It helps us to understand a complex subject by using a simple one. We can transfer delightful nature images to the subject, in this case love. For example, what is the first thing that you see if I say, “[someone’s name] is as tough as an overripe banana”?

I have compared you, my love,
To my filly among Pharaoh’s chariots.
Your cheeks are lovely with ornaments,
Your neck with chains of gold.
We will make you ornaments of gold
With studs of silver.
While the king is at his table,
My spikenard sends forth its fragrance.
A bundle of myrrh is my beloved to me,
That lies all night between my breasts.
My beloved is to me a cluster of henna blooms
In the vineyards of En Gedi.
(Song 1.9–14)

Notice how the passage appeals to our senses. We also imagine the pictures. What pictures do you see? There is also passion, showing us many emotions of love. You can also see the pastoral nature of the Song. Metaphors are also obvious. She is not literally a horse, nor is he literally a bundle of myrrh. With these metaphors we transfer the value of an image to the lovers. For example, the horses for Pharaoh’s chariots were the best of their kind, so she is to Solomon the best of her kind, or like a filly gets the attention of the other horses, so she got his attention. Also, note that the lovers use many images rather than just one.

The Nature of Love in the Song of Solomon

It is a love that is because of rather than in spite of. It is romantic, but it is not lust or merely physical appetite. It is ideal love. It is in the context of marriage, or what leads up to a marriage. The Song does not present the whole picture of married love, because we all know that there are other things involved in a marriage, for example, compare Proverbs 31.10–31.

The Song of Solomon Is Not Well-Known

Hardeman Nichols in Difficult Texts of the Old Testament Explained (pp. 335, 336) shows how unfamiliar people are with the Song of Solomon,

“The Pulpit Commentary says, ‘There is no book of scripture on which more commentaries have been written and diversity of opinion expressed than this short poem of eight chapters.’ Despite these voluminous writings, it is a book about which very little is known generally by students of the Bible.

My father told me that Benjamin Franklin published the Song of Solomon in sections in his American Christian Review without assigning its source or placing a title upon the work. It stirred up so much interest that he received numerous requests desiring to know where a full copy could be purchased. He waited until the last installment to tell them it was in their own Bible! Benjamin Franklin, the gospel preacher, may have taken his cue from his kinsman of Independence fame, who, on one occasion read before the Society of Friends the book of Ruth without comment and without stating the source. He received a similar reaction from them!

2 thoughts on “The Ultimate Song, Song of Solomon 1.1”